Background: Laboratory data suggest that acute myeloid leukemia AML originates from a rare population of cells, termed Leukemic Stem Cells (LSCs) or leukemia-initiating cells, which are capable of self-renewal, proliferation and differentiation into malignant blasts. There is a universal agreement that LSCs lie within the CD34+ compartment of hemopoietic cells and most of leukemic stem cells express the interleukin-3 alpha chain receptor, CD123 and lack CD38. This study aimed to estimate the expression of LSC phenotype in AML patients and to correlate it with response to induction therapy.

Methods: A cohort of 41 patients older than 15 years with newly diagnosed de novo AML were enrolled in this study. They were obtained from the National center of hematology in Baghdad and Baghdad teaching hospital between February and July 2013. The expression of CD34, CD38 and CD123 was assessed by multi-color flow cytometry. LSC positive (LSC+) samples must express CD34 and CD123 and lack the expression of CD38 in >1% of cells. French American British (FAB) classification system was used in this study.

After four weeks of induction therapy; three groups were found: those who reached the Complete morphological Remission (CR), those who failed to reach CR and those who died before the assessment of morphological remission. The last two groups were merged for statistical purposes.

Conclusion: LSCs were expressed in 63.41% of AML cases and were in approximate distribution in FAB M3 and non-M3 patients. The expression of LSC phenotype was associated with poor response to induction therapy in AML patients. 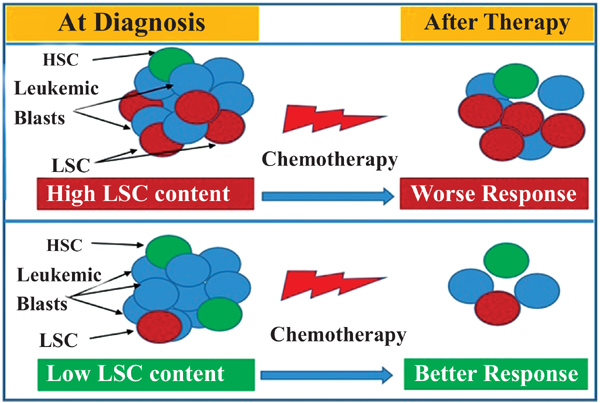