Background: The effect of hydroalcoholic extract of Ziziphus jujuba (ZJ) on hypertension has been reported previously.

Results: AngII could significantly increase SBP and MAP (P<0.001) and decrease HR with respect to the control and these responses were attenuated by LOS. The SBP and MAP in both doses of EA+ AngII and the higher dose of AQ fractions + AngII were significantly lower than the AngII group (P<0.05 to P<0.001). Bradycardia induced by AngII was also reduced by LOS and both fractions. The comparison of two fractions also showed that the effect of EA fraction is greater than the AQ.

Conclusion: This study indicates that both fractions of the ZJ extract have a beneficial effect on hypertension. Because effect of EA was greater than AQ, we suggested that antihypertensive effects of ZJ mediated polar and nonpolar compounds. 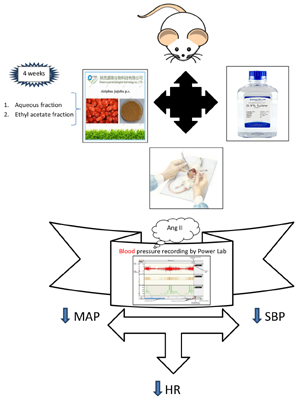